Fat Ass At The Farm 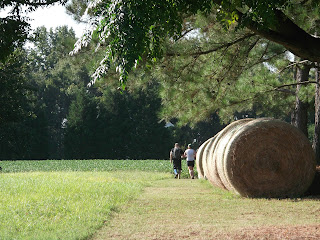 It was during the Medoc Meltdown Fat Ass that it came to me. I should run 32 miles for my 32nd birthday and I should run it with friends. The day after Medoc, I went out to my parent's place in Smithfield with my training partner, Gene. He was there to help me map out a potential course and to give me feedback on whether my idea could work. Using his Garmin because I had forgotten mine, we walked around the big hay field and then down towards Swift Creek and back. It came out to a nice 1 mile lollipop shaped course. With my parent's skeptical approval, I sent out a Facebook invitation to some  running friends inviting them to the Fat Ass At The Farm. I planned to do 32 one mile laps to celebrate my birthday and reach my goal of 32 miles. The Friday night before the run, I drove to my parent's place to put up a few directional signs at the mailbox and a couple of other turns to the farm and to get ready for the next day's fun. Around 9 PM, I headed out into the darkness with my head lamp to check the mileage and put up a turn around sign and a couple of other signs to guide runners around the course. It was just a little eery, very humid, and there were huge spider webs across the spur part of the trail. I had to laugh when my Garmin showed the length as not 1 mile, but 1.24. So much for a perfect 1 mile lap but I was not about to try to change it at that point!

The morning soon arrived and I got up at 6 AM to set up the canopy, table, water, and Gatorade. The start/finish was in a shady spot close to the house where there was plenty of room for runners to set up their chairs, tables, canopies, and gear. Friends began to arrive around 7 AM and I put mom in charge of getting runners to sign a waiver and to let them know about their runner sheets. I had printed out lap sheets for participants to check off each lap as they came around. It seems like a simple thing to count laps without paper, but personally, I knew I would lose track at some point during the long day. 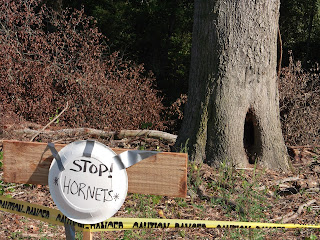 I gave a few last minute instructions including a warning about the hornet's nest near the course, the location of the restroom inside the house, and that runners could go either way around the loop and could switch directions at will throughout the day to keep things interesting. We started off a few minutes after 8AM. We followed the hay field around to the left, trotting through the freshly mowed grass (thanks to my dad who had mowed for us on Friday). This was a section that would be sunny later on in the day and quite warm but it was short and soon we were winding through a couple of trees with minor roots, nothing much to worry about for seasoned trail runners. Next was the Swift Creek spur section and we turned left down a shady path which flowed slightly downhill for a quarter mile until we reached the turn around sign and headed back up what was now a slight incline going the other way. My favorite part of the course was next. It was a wide shady path through some large Bradford Pear trees with the pretty field now to our right. It was a gentle slope up and at the top, we turned to the right to run next to some old round bales and one more turn to the right down the driveway and back to the start where a feast of junk food was waiting for us. As I had promised my friends, the course was runnable with all of it being dirt or grass and the majority of it being in the shade. 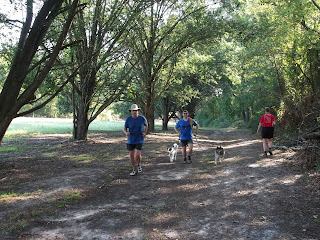 Throughout the day, friends trickled in to the event to run their laps or just to hang out and relax. We had our two dogs, Bogart and Amelia, and a few other fur kids. Ben brought Yoda, Candace brought Peanut, Jim W. brought Canyon, and Jim P. brought Sara and Wilbur the ultra pups. It was great having so many pups out to enjoy the day too! All were well behaved...including the humans. I was able to run a lap with my sweet Bogart, a lap with  hound dog Amelia, and another lap with Bogart before they got tired and spent the majority of the day chilling in the fenced yard enjoying the beautiful weather. It was a little humid, the high was in the upper 70s and though warm, there was a nice breeze to help keep things manageable.

My good friends and training buddies, Gene and Mo, were the first male and female to finish 32 miles. Chris K. covered the longest distance of the day, 35 miles, and went on to complete a trail 50K the following day. He's only a little nuts but we like him. ;-) 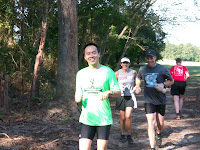 I kept plugging away until I was almost to my goal of 32 miles (No way in hell was I going to do my originally planned 32 laps since it would actually have been 40 miles). Ironically, I started to feel pretty ill half way through my last lap. I got dizzy and felt nauseated and trudged back to the finish where I forced myself to run in then promptly sat on the ground so I did not pass out. It was likely due to not taking in enough salt. I had been drinking dilute Gatorade all day, but I am a sweaty girl and I had not used any additional salt tabs, electrolytes, or anything. Anyway, my calves cramped a bit and I didn't feel great for a little while, but salty chips, a comfy chair, and a beer made it all better. Those who were still there enjoyed relaxing, snacking, and drinking beers or soda. Mo had brought corn hole and that was set up and a couple of people played. It was a great end to a long, but fun, day.

So, now that I am 32 you may wonder what I will do with the name of this blog. Well, I am not changing anything because I started this to try to capture my running experiences and I started it when I was 31. 31 Years and Running is therefore accurate. Here's to running friends and at least another 31 years of running! Cheers! 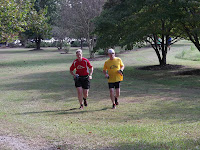 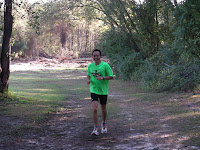 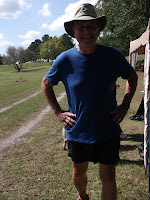 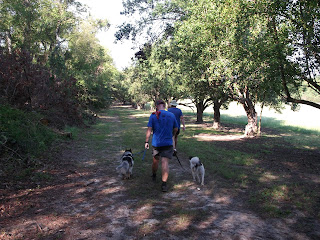 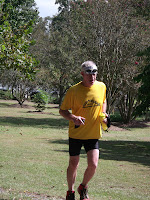 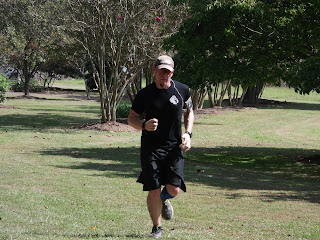 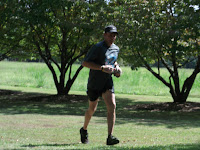 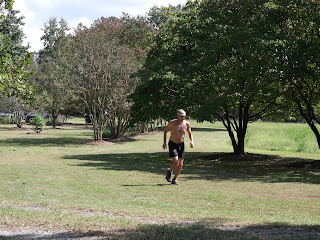 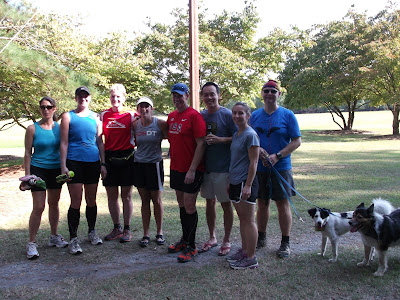 31 Years and Running
Raleigh, NC, United States
I'm hooked on running for 6+ years now and have started running ultras for the past year and a half. I love the outdoors and running is a great way to exercise, enjoy beautiful places, and spend time with friends old and new.